I — me, an individual, a committee of one. 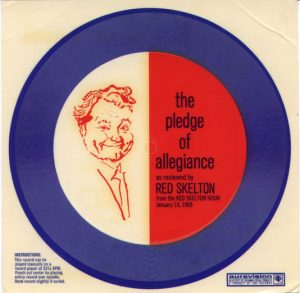 Pledge — dedicate all of my worldly goods to give without self-pity.

Allegiance — my love and my devotion.

To the Flag — our standard, Old Glory, a symbol of freedom. Wherever she waves, there’s respect because your loyalty has given her a dignity that shouts freedom is everybody’s job.

[of the] United — that means that we have all come together.

States [of America] — individual communities that have united into 48 great states. 48 individual American communities with pride and dignity and purpose, all divided with imaginary boundaries, yet united to a common purpose, and that’s love for country.

One Nation — One Nation … Meaning, so blessed by God.

Indivisible — incapable of being divided.

With Liberty — which is freedom, the right of power to live one’s own life, without threats, fear, or some sort of retaliation.

And Justice — the principle or qualities of dealing fairly with others.

For All — For all which means, boys and girls, it’s as much your country as it is mine.